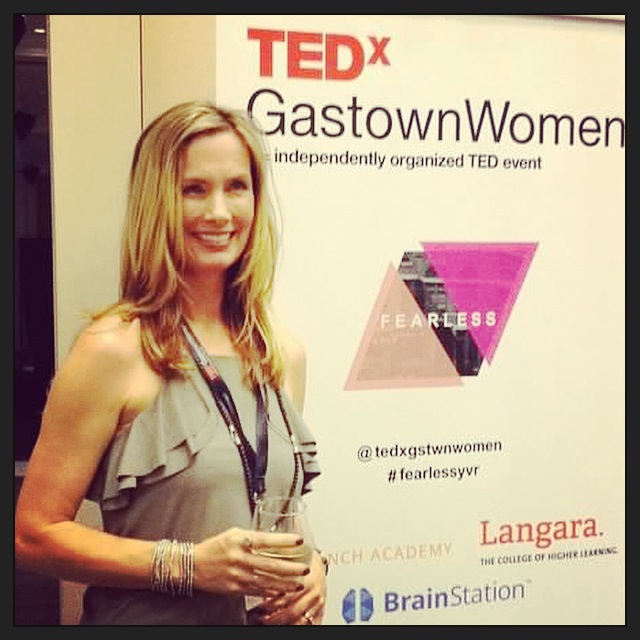 About five years ago, I read—and was greatly inspired by—Brene Brown’s book Daring Greatly. Near the beginning, she mentioned appearing in a venue I’d never heard of before: a TED talk. I googled it and pulled Brene’s talk up on YouTube, marvelling at her courage as I watched. At the time, I was about three years into struggling to write my memoir, North of Normal, and the thought of even opening my mouth to utter a birthday speech among friends was enough to set my palms sweating with fear. Literally. How does she do it? I wondered. How can she even keep her voice steady with that many people watching her? What I never could have guessed was this: one day in the not-too-distant-future, I would be called on to speak at this very same venue on the topic of fearless.

I have always been exceptionally terrified of public speaking. It all stems from my childhood, naturally—always feeling like the freaky girl from the wilderness with the ill-fitting thrift-store clothes and ridiculous height, unable to break from my own confident-deficit expectations of myself to allow any value of my experiences to emerge. Whenever life dictated otherwise—wedding speeches, group introductions—insecurity and voice tremors dominated. And then my book came out. Public speaking was celebrated and expected. Suddenly, every fear and illusion I’d had about my own abilities and confidence needed to be examined, and quickly. In my first month of being a published author, I did five TV appearances, seven radio interviews, six book club appearances, and a host of other newspaper and magazine media outlets—and that was just the beginning. But nothing could have prepared me for the experience of speaking for TED.

First off, let’s clarify: my experience was not on the level of Brene Brown’s. While she likely appeared before an audience of thousands, my talk was an independently organized TEDx venue comprised of a couple hundred viewers. By that time, a year after the release of my book, I’d spoken before bigger audiences for corporate events. But that didn’t stop the TED franchise name from both exciting and intimidating me—big-time. When I first got the invitation, I jumped for joy, emailed everyone I knew to tell them the news, and screamed it out on all my social media. Then reality set in: I actually had to create a compelling, ten-minute long presentation, and deliver it onstage without notes. But hey, no worries, right? After all, I do consider myself to be rather fearless, and I often expect the same from others.

Needless to say, I researched. I watched the ten most-viewed TED talks, the ten most inspirational TED talks, the ten best TEDx talks of all time. I got the email address of a fellow TED-talker in my neighbourhood and asked her a million questions. And then I crafted. I power-pointed and edited and regrouped, then I sat on the sofa practicing my talk to myself while my kids looked at me like I was a crazy person. “It’s okay, Mommy’s just practicing saying stuff in front of hundreds of people,” I told them, and then they became interested. It became impossible for me to rehearse without two or three of them running around me asking why I was showing naked pictures of myself or talking about some weirdo on the highway. After so much critiquing from the under-ten set, I had the brilliant idea of inviting my girlfriends over for a “rehearsal party”.  I would supply the wine and appies, and they would supply the feedback. Great, right? Right, except my girlfriends happen to be just this awesome: not only did they bring plenty of wine themselves, which resulted in a fun party atmosphere, they brought real feedback that was both supportive and constructive. I’m not sure that I was prepared for it, because the bottom line was this: I had some work to do. Bless them, and bless honesty. I rehearsed about fifty more times before do-day.

I am constantly surprised at the lessons and learning that come my way. Resilience is the buzzword of my life. Two days before my talk, life—and my carefully defined experience of fearless—challenged me in a big way. A small personal crisis that had been brewing for several months exploded. I spent the night bawling my eyes out (and trust me, I’m not much of a cryer) and the day before my talk, I walked around with eyelids so swollen I barely dared leave the house. If my talk would have been that night, I probably would have been forced to cancel, I was that raw and distraught. My whole perspective shifted. I felt like a fraud. How ironic was it, I thought, that I was about to preach about fearlessness when I was suddenly filled with terror. And who really cared about a stupid TEDx talk, anyway, when my family was at risk of falling apart? So I did the only thing I could: I read my presentation over and over again and tried to take my own advice.

The big day came. Caught up in a blender of anticipation and nerves tempered by a huge dose of who-the-fuck-cares, I brought my husband and an A-list girlfriend along for support. I checked in at the venue, met the lovely organizers, and forced myself to focus, forget, and shove aside. For me, the best part of the event was the distraction of meeting and listening to the other speakers. Tori Holmes inspired me big-time with her story of rowing across the Atlantic. Pamela Goldsmith-Jones has become my candidate of choice in the upcoming election. And the last speaker of the night, Anja Novkovic, blew me away with her incredible story told through original poetry. And when it was my turn to walk onstage, I did it. I got up there and did my thing without freezing or blanking out or pacing back and forth too much like I normally do when I’m nervous.

Okay, great. I got through it without throwing up. So what then?

It took three months for my talk to get edited and hit Youtube, and I gazed miserably at the screen when the screenshot first appeared in my inbox. There was a light across my forehead that made me look like I was wearing some sort of weird 80’d headband. And when I watched it, all I could think about was how flat my hair looked, how I’d chosen the wrong outfit, how my slideshow wasn’t visible behind me, how two of my attempts at jokes bombed, how I wished I could do it all over again because I’d been so stressed out in the days before that I hadn’t had time to be concerned with such things. But still, I had done it. Friends and readers of my book watched it and said they were inspired by it. I had conquered one of my greatest fears, and in the process realized that it wasn’t anything compared to my fear of crisis within my family. As had happened so many times before, I had lived the duality of successful creativity flip-sided with challenging life circumstances. For me, the two seem to co-exist without independence.

Now, with the normal pace of life within my family re-established, I once again feel fearless. But I am also certain there was a lesson in the timing of events, and what I’ve come up with is compassion. How often have I felt impatient with people when they told me their stories of feeling fearful? Just move forward and do something, I would think—and don’t get me wrong, this is still the prescription that works for me and what I truly believe in. But with my flawed human-ness brought into full focus over those days, my compassion has been restored, and for that I am grateful. And here’s another lesson that’s almost too perfect: Brene Brown’s book, the very one that started this journey for me, teaches the power of embracing our vulnerability–and it was my very own TEDx experience that really brought that home for me.

So. Go fearlessly, but never be ashamed to admit your fear when it gets the best of you. And then…move forward. 😉