DISULLUSIONMENT, DESPERATION AND DIRTY DIAPERS: MY JOURNEY TO GETTING MY MEMOIR PUBLISHED

To say that my road to getting my book published was bumpy is like saying that childbirth is painful. It is, of course, but the word doesn’t begin to describe the intensity of the feeling or the crazy roller-coaster ride of excitement and frustration along the way, crowned by that moment of bliss when you finally hold that beloved end product in your hands. Um, I mean arms. You see? For me, the two experiences are closely intertwined.

So here’s the thing: I am currently writing my second book, also a memoir, and much of it is based around the time in my life that I was writing North of Normal. So, as much as I would like to go into all the painful details here, I can only offer the Cole’s Notes version of my path to publishing here.

Ever since I was a teen, I’d known that I would write my memoir someday. My story was simply too crazy not to be told. But there was one problem: I had no idea how to put words together in a way that other people might want to read. I first opened my laptop to put my story down in 2007, when I was thirty-seven. I was living in Halifax at the time, part of an ill-fated one-year experiment to try to save the marriage I was in at the time. It was a freezing January evening, and I had just put Avery down to sleep. My husband was working in his home office, and The Glass Castle was sitting beside me on the end table. I picked the book up, thinking about the author’s incredible story. I felt like my own life had been as interesting as hers, but until then the only things I’d ever written were a few lame, tortured poems in high school and some half-baked attempts at journaling spaced at six-month intervals. And yet somehow, I’d always believed there was a writer inside of me, just waiting to bust free and churn out a bestseller.

I worked on my first draft every night for three months. In my mind it became The Book, the only object of passion and purpose in my life aside from my son. When I finally read the manuscript back to myself, I told myself it was pretty damn good, but deep down I knew the truth: it was horrible. Disjointed, one-dimensional, lacking in emotion, and easily forgettable. But I was desperate–desperate for validation of my interesting life, for escape from my marriage and financial problems, for stability for my child–and desperation, of course, breeds hasty decisions made in fear. I told myself that my memoir could stand on the uniqueness of the story alone, and started querying literary agents. A 99% rejection rate? It wouldn’t apply to me–my tale was simply too compelling not to publish.

And so it went. Initial, promising interest soon turned to dismissal as agents read first chapters and politely wrote back that my writing could do with some polishing. I dried my tears and started a new draft as my life began to seriously unravel (more on that in my next book, should it see the publishing light of day!). I moved back to Vancouver, queried again, and this time I got an agent. Elated and determined to succeed, I asked him for four months to “perfect” my manuscript. He agreed. Fragile hope for my publishing future replaced outright doubt, but desperation lingered; I’d recently separated from my husband, and the financial and emotional hole I had dug myself into was almost too deep for me to see out of.

I finished my draft. My agent submitted to publishers, and a month later it was all over. Sixteen US and four Canadian editors said basically the same thing: fascinating story, but not well told. Sinking into myself, I closed my laptop and turned my focus to other things. I met a wonderful new man, got pregnant, married him, attempted to start a business, and had a baby boy. My agent dropped me, but still The Book would not let me go. It percolated at the back of my mind as I changed Emerson’s diapers, played trains with Avery, and cooked dinner for my husband. I started writing again. During naptimes and weekends, I wrote–draft after draft after draft. My amazing husband Remy–the right man, finally and thankfully– played with the boys and believed in me.

Two years passed, and still I knew the manuscript wasn’t good enough. We moved, renovated, and got pregnant again. Knowing I would have almost no time to write once the new baby came, I increased my pace and fired off a new round of query letters to agents. By the time I was in the hospital to meet my new baby girl, all but one agent had responded negatively. The last response, from the one agent who had requested my entire manuscript, came while I was cooking dinner with Ayla in one arm. I opened her email and skimmed it quickly, hoping upon hope for anything positive. Instead I saw “terribly sad”, “more and more of the same” and “unable to place this”.  I pushed away the sucker-punched feeling in my stomach and sat down to dinner with Remy, too heartsick to even confide this latest development to the person closest to me.

After that, I was done. Exhausted from almost no sleep, with a baby on my breast, a toddler in the throes of tantrum-land, and an older son to raise, I read my manuscript one more time, and finally agreed with all of those agents and publishers: it sucked. I decided to shelve it indefinitely, perhaps until my youngest graduated from high school.

But sometimes, personal relationships can be more helpful than a roomful of professionals. Because even if those agents didn’t believe in me, I had a few friends who did. One of them insisted I let an editor friend of hers read my manuscript. I did, and he loved it. It needed work, he told me, but the story was fascinating. And to my utter surprise, he told me that the writing was excellent. My mind settled around those words. Could it be that after six years of writing the same book over and over again, I had actually taught myself the craft? Yes, he assured me. The manuscript was very close to being saleable, he added, and I shouldn’t give up.

The truth was, for all my disappointment and proclamations of being “so over it”, I had never intended to give up–and that was exactly the problem. I knew I would keep rewriting the damn thing until it either got published or I lay on my deathbed, and that was, in a way, a very sorry way to live. But I realized I couldn’t do it alone anymore. I paid my new editor friend a bit of money to help me move story blocks around and cut out the junk, and then I wrote one more draft beginning to end. Then, for the fourth time in six years, I was ready to query agents. It was October 26th, 2012. While my husband occupied the children, I double-checked my spelling, took a deep breath, and pressed the send button to fifteen different agents. If this did not succeed, I knew I would keep writing and try again in a year or so. But with each rejection letter, a little piece of my already struggling confidence in this project was snuffed out. And I wasn’t sure how many pieces I had left in me.

The next morning, I opened my inbox to see messages from three agents who wanted to read the full manuscript. Two days after that, I got my first offer of representation. Within a week I had five offers, including one from my dream agent–Jackie Kaiser, arguably the best in the land. It was an absolutely unexpected and mind-bending turn of events, but experience still made me wary of the ultimate outcome. Jackie and I worked diligently on my manuscript over the next two months to prepare it for submission to editors, and never once did I entertain the thought that having my book published was a forgone conclusion. Anything could happen.

In the end, what happened was everything I had dreamed of and more. My memoir sold to HarperCollins Canada in a pre-empt, and then, after considering offers from three American publishers, I went with HarperCollins in the US as well. And it was only after the whirlwind of excitement was over that I noticed something different about myself. Throughout the whole process of getting an agent and publisher, the one thing that had been missing was my old and unwelcome sidekick: desperation. As has been proven to me time and again, success only presents itself when we are least needy of it.

In less than four months, my book will be on bookstore shelves. It still feels a little surreal sometimes. Writing my memoir has taught me the craft that I hope to continue as my career, and for that I am forever grateful. But my optimism for The Book is tempered, and my goals are modest. For now, I just look forward to seeing that shiny new cover with my name across the bottom on bookstore tables, displaying to all a dream that began nearly seven years ago: I, Cea Sunrise Person, have written a published book. 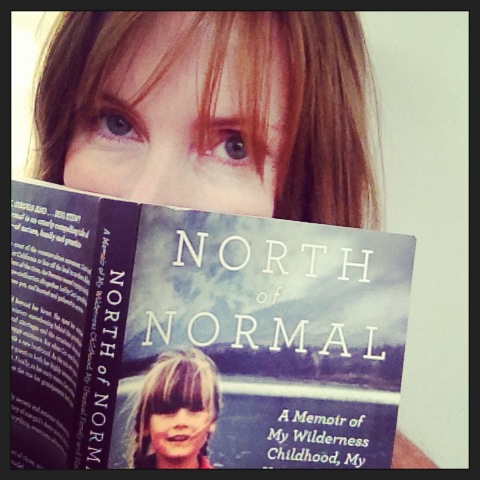 Go away, I’m trying to pretend to read.