Yesterday, as I added my book trailer to my Facebook page, I reflected on the collaborative effort it took to create it. The fact is, if it weren’t for my friends, this project wouldn’t have seen the light of day.

I’m one of those people who doesn’t like to spend money on services. I need a website? I buy the software and figure out how to build one. The basement needs to be drywalled? I drive to Home Depot and corral the sheetrock salesman. So I thought making a short, snappy, enticing trailer for my book would be a breeze. Wrong. After a month of toiling on amateur software, trying to do voiceovers while the kids screamed in the background, and badgering my husband to interview me on camera “just one more time”, I finally produced a piece that rose just slightly above the point of being embarrassing. The first person I showed it to was my close friend Shannon, because as an in-demand reality TV producer (Dr. Phil, The Real Housewives, Love it or List it, etc), I knew she’d be discerning. And discerning she was. After sitting through it quietly, she turned to me and said sweetly, “Um…it’s good. But you know, this is what I do, so…” Right. She promptly offered to help me, and a week later I was sitting on a chair being interviewed by her under her Director of Photography husband’s amazing lighting. Between the two of them, they managed to make me look like I was telling all for 20/20. Bless their talented souls, and talk about true friends.

Next up was editing. Feeling like I’d taken up enough of Shannon and Josh’s time, I assured them I’d have no problem putting it all together on iMovie. Two weeks later, the result looked like some bush-league chop-job done by a talent-free film student. Shedding my pride, I showed my masterpiece to my amazing friend Nicole, actor and voiceover artist extraordinaire. She smiled politely and offered to run it by it to her husband (and my friend) Chris, a super-talented film editor and music composer. “It’s good!” he said brightly on the phone that evening. “It’s just that, well, this is what I do, so…” Right. Once again, my butt was saved when he swooped in, took over my files, rejigged them and laid down his awesome music in the background. Add Nicole’s voiceover coaching, and the end result is something I am truly proud of.

Many times over the years, I have been humbled by my friends’ generosity. There’s my longest-time girl Carleigh, who befriended me on my first day of fifth grade and has stood by me through some of my worst moments. She and her husband even gave me their second car for six months after I got divorced and was flat broke; how’s that for true friendship? And then there’s Heather, a modeling compatriot from when I first arrived in Europe, who took me under her wing and taught me to spread my own–one of the first people who I felt truly believed in me. Suzana, another modeling bestie who used to look after my cat whenever I went out of town, and who now flies halfway across the globe to visit me and fawn over my children. Jenn, who helped me close a business deal just days after I met her when she learned how desperately I needed it at the time. Dianne, who took an interest in my book and wouldn’t let me give up, introducing me to people who were key to my getting it published. Wendy, Traci, Tracy, Tracey, Susan, Cynthia, Janet, Amanda B, Amanda T, Debra, Lisa, Meghan, Jenny, Michelle…the list goes on and on. Each of these amazing women, and many more who are either new to my world or were once a bigger part of my daily life, have contributed the most generous gift there is: their time and conversational skills.

Which brings me to this: if you are one of these friends and are reading this now, I want you to know that I appreciate your support at this time in my life more than ever. As I stand just weeks away from achieving my lifelong dream of publishing my book, I ask you to please forgive my temporary self-involved state–my book, my life, blah blah blah… It’s not like me, you all know that, but this is my year and I have to live this wholly and completely. You all are the family I always wished to have.

Okay, now enough about you and back to me. Here’s the book trailer: 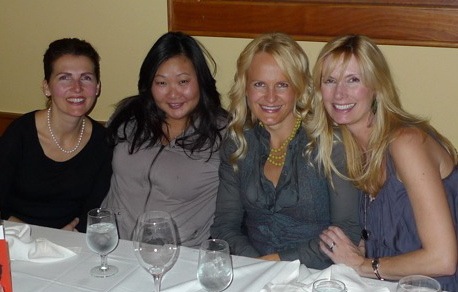 I don’t take near enough pics of my friends. Here’s one from a couple years back.