North of Normal will soon be a feature film! 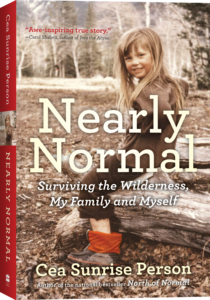 In her bestselling memoir North of Normal, Cea wrote with grace and candour about her unconventional childhood – her early years living in a tipi in Alberta with her pot-smoking, free-loving counterculture family; the numerous misadventures she survived with her mother and her mother’s boyfriends; and the bold escape Cea made from her family at the age of thirteen through a modelling career. After putting such a unique life on paper, one would expect Cea’s tale to be all told – but that’s far from the case.

At the age of thirty-seven, Cea has built a life that looks like the normal one she craved as a child-husband, young son, beautiful house, enviable career. But her carefully art-directed world is about to crumble around her. As she confronts the death of her still-young mother, the disintegration of her second marriage and the demise of her business, all within just a few months, she finally faces the need to look at her past to make sense of her present. But even as she bares her soul through writing a memoir, stories too difficult to reveal fail to make it to the page.

Nearly Normal chronicles the many stories Cea left untold. Settled into a new and much happier life after the release of her first book, she is nonetheless compelled to continue searching for answers about her enigmatic family. Drawing connections between her early experiences and later life mistakes, Cea identifies how her family’s extreme and often selfish behaviour contributed to her downfall. But more importantly, she discovers the value in the lessons they taught her, and the power of taking responsibility for her own choices in the face of great challenge. 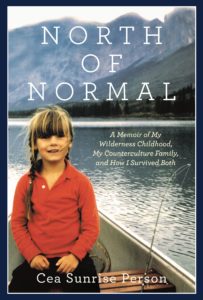 In the late 1960’s, Cea’s charismatic grandfather, Papa Dick, determined to abandon civilization, uproots his family from suburban California and moves them to the Canadian wilderness. Along with her teenage mother, Michelle, Cea spends the first decade of her life in and out of canvas tipis with neither electricity nor running water, at the mercy of fierce storms, food shortages and adults more interested in their own desires than parenting a child.

Knowing no other world, Cea is happy enough running nude in the meadows and snowshoeing behind the grandfather she idolizes. But for Michelle, one crucial element is missing: a man. When she strikes out looking for love, spinning from one boyfriend to the next, Cea is for along for the ride–and into a harsh awakening. Finally, in her early teens, Cea realizes she will have to make a choice as drastic as the one her grandparents made to get the kind of life she craves. Cea’s journey of self-discovery and acceptance, which comes full circle when she has children of her own, is profoundly moving, celebrating the strength we all carry within us to shape our own destiny.