One week ago, I took a package down to the post office and slapped it onto the counter with a silly grin. Never mind the odd glance from the cashier; I was there to mail the final proofread pages of my manuscript back to my publisher, and it was my moment to celebrate! After all, after eleven months of editing my soon-to-be-released memoir, North of Normal, my work was done. Um, say what? Could this really be true? Not venturing into the bottomless-pit-of-fodder of the 30+ drafts I’ve worked on over six years to make my book good enough to get an agent, and then a publisher (I’ll save that for another day), what I will talk about here is the difference between what I imagined the editing process would be like versus its reality.

Before I got a publishing deal, I spent more than a little bit of time staring off into space when I should have been writing, daydreaming about what it must be like on the other side. From my own terrain, that of a hopeful would-be author, I imagined the editing process would go something like this:

1. Editor reads manuscript, loves it and buys it

2. Editor goes through manuscript, marking where I should delete or expand, and returns it to me

5. My book goes to print

Can someone say this chick is green? As it turned out, there was a whole team of lovely folks whose job it was to help me rewrite, reevaluate, and rejig my book. In actuality, the process looked a lot like this:

2. Since my book is bought by HarperCollins in both Canada and the US (not always the case – often they are bought by difference publishing houses in different countries), my two editors decide between them that Iris from Canada will be my main editor. I must say here that both she and Claire, my US editor, have been two of the most awesome people I have ever e-met (they are in Toronto and New York respectively, so we haven’t met in person yet). Encouraging, insightful and respectful, they’ve been way more enjoyable to work with than I could have predicted.

3. Nearly two months after Iris buys my book, I haven’t heard another word from her by either phone or email. I know that my pub date is more than a year away, so there’s no big rush, but secretly I’m freaking out a little that she’s completely forgotten about my book/reread it and decided she hates it and just doesn’t know how to tell me. But then my first advance installment arrives in the mail, and I relax a bit. Surely they wouldn’t be sending me money if they’d changed their minds? I muster up my courage and send Iris a check-in email. She responds enthusiastically, apologizes for being busy and tells me she’s looking forward to getting started on my book. Phew!

4. Three weeks later, I get a detailed email from Iris with the changes she’d like to see to my manuscript. Because I’m highly motivated/obsessive-compulsive, I bang out the edits in about two weeks. Iris seems a little taken aback by my speed, but praises my efforts and tells me she hopes to read it in the next few weeks. I grin gamely and vow to craft out with the kids every day to keep my mind off her future potential reaction.

5. As promised, I get a detailed response from Iris about a month later. Overall she’s happy, but she wants a few more tweaks. My husband occupies the kids, I work on the ms over the weekend and send it back to Iris on Monday. Once more, she admires my speed and politely tells me she’ll get to it “as soon as I can”. I sigh and break out the glue gun again.

6. A couple weeks later, Iris lets me know she’s happy with the changes and ready to send it to copyediting. Hooray! I assume this is the last step until first pass pages. Hahaha.

7. About a month later, I get an email from a lovely woman named Noelle. She is the managing editor at HarperCollins, and she lets me know that both she and my freelance copy editor, Allyson, have read the ms and are sending it back to me with their markups. Excitedly, I open the document to take a look. Omg, horror of horrors. There is virtually not one single page of my whole, entire, ninety-thousand-word manuscript that does not have a red (for Allyson) or blue (for Noelle) comment or edit on it. Instructed to either accept or reject changes with my own color, green, I get to work. I seriously cannot believe how many times I use the words “terrified” (nineteen) and “crunched” (twelve). Thank god for thesaurus.com.

8. After sending the ms back to Noelle, she and Allyson (who is amazingly fabulous, by the way, the perfect combo of brilliant, critical and reassuring) both reread it and return it to me for a few further tweaks. I’m doing an awesome job, Noelle tells me, which makes me embarrassingly and disproportionately happy. And as soon as I finish this round of edits, she adds, the ms will be ready to send to Claire. My tummy feels a little nauseous, just for a sec.

9. Though I adore Claire, she intimidates me the tiniest bit. At this point I haven’t communicated with her a lot yet, and she’s such a legend in the business that I can’t help worrying a bit about her reaction. Claire reads the book and gets back to me with her comments. Thankfully there aren’t many of them, because they are all valid and, um, served without sugar. Ack!

10. I incorporate changes based on Claire’s comments and send the ms back to her and Iris. Perfect, Iris says, now she’ll just forward it on to legal. Say what? There’s another little twinge in my tummy, but this time it’s similar to the way a customs officer makes me feel like a criminal just for coming through his lineup. No worries, Iris assures me, their lawyer just need to be on the lookout for possible libel issues because my story is a true one.

11. HarperCollins’ US lawyer reads the ms and calls me to go over a few things. She just wants a couple of identifying features changed, and that’s that. She lets me know she’ll be sending it on to the HC Canadian lawyer next, and we end our final email convo by exchanging cute pics of our kids. Happy day.

12. A week or so later, I hear from Iris again. She’s had their Canadian lawyer look at it and sends me a list of her notes. Clearly, things in Canada are a little different. The Canadian lawyer not only wants several additional changes, she also wants some validation that my story is real. I know there have been some issues with fictionalized memoirs over the years, so this turn of events is not totally unexpected. I send photos, school and divorce records, and a list of contact people from my former lives. Iris has a brief and reportedly pleasant phone conversation with my father, and everything’s A-okay. I stop obsessing.

13. I get one more email from Noelle, asking me to deal with a few last-minute tweaks from Allyson, my copy editor. I do so, and Noelle sends the ms on to Iris.

14. Iris asks me to draft the changes suggested by the lawyers. She then sends my response on to Doug, her assistant, to key these edits in so that we don’t get too many drafts circulating, of which there are currently about twenty between myself, Noelle, Claire, Iris, Doug and my agent Jackie. A bit of confusion ensues as to which one is the most recent.

15. Doug inputs the final changes and sends the ms back to me for approval. I accept, he sends back a message saying it is now going to proofreading before being sent to typesetting. Once again, I assume my job is done. Not so.

16. A few weeks later, I receive a package in the mail from HarperCollins Canada – my typeset manuscript!! I spend a few minutes drooling over the layout and marveling at its physical likeness to a real book. Then, while my husband plays with the kids at the park that weekend, I sit on a nearby bench and proofread and mark it up as instructed. As much as I had been dreading reading my ms for the thousandth time, to my surprise, I enjoy the process. The typeset pages give me enough distance from my own writing to feel like I am actually reading – yes, a real book!

17. Three weeks before Christmas, I receive a very special item in the mail: an advance reader copy of my book. This is essentially an exact mockup of the book, minus input of final proofreading edits and reviews on the back cover. I hold it in my hands, and for a moment I really am filled with the feeling I had hoped for: a sense of pride and accomplishment.

18. Just before Christmas, I receive my US first pass pages to proofread and mark up. I complete the edits on a day just before New Year’s, and voila – here we are. A much more involved, detailed and rewarding experience than I’d ever imagined. I’m happy and relieved to be finished, but also a little achy inside, because despite everything, I really did enjoy writing this book, as well as – yes – the editing process. I guess that can only mean one thing: time to start writing another one! 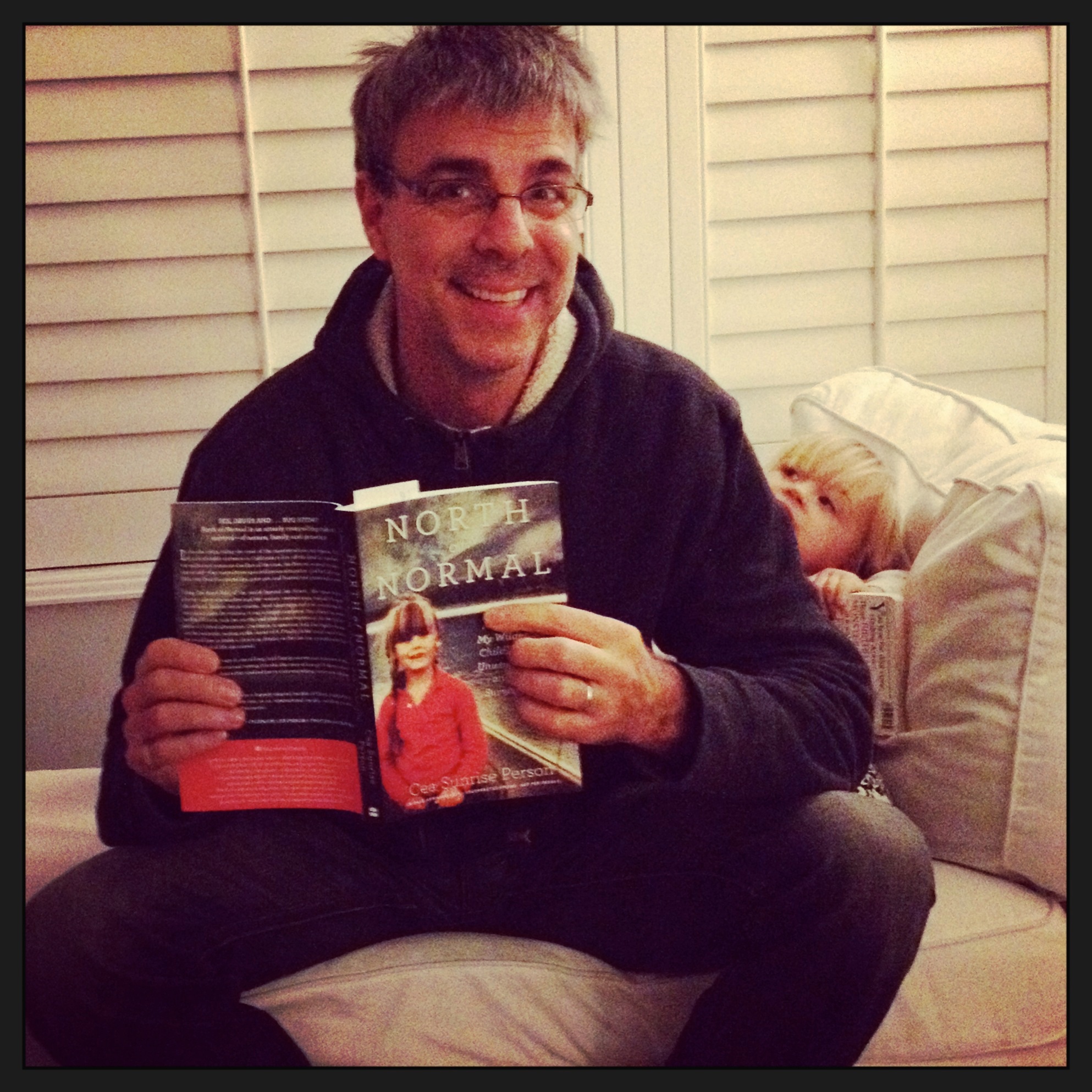 My husband holding my advance reader copy, peekaboo Emerson in the background